Adlink has unveiled the “Express-ADP” Type 6 and “COM-HPC-cADP” Client “B” modules based on the recently disclosed 12th generation Intel Alder Lake-H processors, with 16x PCIe Gen4 and 64 GB of DDR5. Seco, meanwhile, is preparing a COM-HPC Client “A” module.

Following Intel’s announcement of its 12th generation Alder Lake processors, starting with six high-end S-series desktop models, Benchleaks leaked some specifications from the Geekbench database in December, which revealed details of the most power-efficient mobile models, including the Alder Lake-P chips and the high-end Alder Lake-H series chips. Now, in anticipation of a full Alder Lake reveal by Intel in conjunction with this week’s CES virtual show, Adlink has announced two Alder Lake-H-based compute modules. Intel also has a preliminary product page on a Seco module. 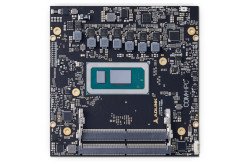 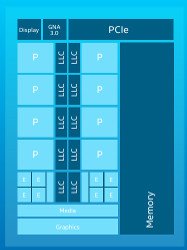 Seco’s CHPC-D80-CSA uses the smaller COM-HPC Client Size A variant. Like the Adlink products, it supports Linux and Windows (see further below).

Like Tiger Lake, Alder Lake offers high-end graphics up to 96EU Iris Xe, as well as Intel Deep Learning Boost (DL-Boost) and Intel Advanced Vector Extensions 2 (AVX2) for AI acceleration on CPU and GPU cores. The 12th generation platform scales up to 4800 MT / s of DDR5 RAM and up to 16 PCIe Gen5 lanes, which offers up to twice the throughput of PCIe 4.0. Adlink modules, however, are sticking with PCIe Gen4, as it will be some time before PCIe Gen5 cards and modules become available. (For more details on Alder Lake, see our 12th Gen Intel report.)

Only one of the three Alder Lake-H models supported by Adlink is included in the Benchleaks list of seven models: the 14-core, 20-thread Core i7-12800HE. (The Seco does not list individual models.)

The Adlink SKUs are as follows:

Adlink doesn’t list clock frequencies, but the Benchleaks report lists a base speed of 2.8 GHz for the Core i7-12800HE with 1,654 single-core and 9,619 multi-core performance scores. As noted in a TechRadar article on leaks, performance scores should be taken with some skepticism. The Benchleaks-based TechRadar charts (below) show an unusual mishmash of single-core and multi-core scores, with some models more optimized for multi-core than others.

As usual with Intel, there is some brand confusion. Adlink’s ad and block diagrams refer to the chips as Alder Lake-P, but the PR also mentions Alder Lake-H. Elsewhere it is said that the chips were “formerly Alder Lake-P”.

Alder Lake-H (left) and Alder Lake-P processors (scores may be incorrect)
Source: TechRadar based on information from Benchleaks Geekbench database
(Click on the pictures to enlarge them)

According to this October HardwareTimes story, Intel had recently renamed its P-series mobile processors from U and H series. Meanwhile, the TechRadar report linked to above shows separate charts for Alder Lake-H and Alder. Lake-P. The P-series graph shows a similar core count to the H-series, but with lower L3 cache and lower base clock frequencies. It also lists the turbo rates, which are not displayed for the H-series. Hopefully Intel will sort this out for us in a few days.

The Express-ADP supports up to 64 GB of dual channel DDR5 up to 4800 MT / s. The module provides Intel I225 series Ethernet controllers for GbE and 2.5 GbE, with a potential “TBC” build option for TSN. 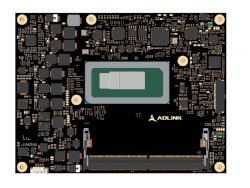 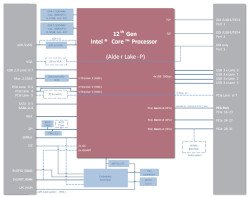 Multimedia features include support for quad 4Kp60 display. The references Iris Xe, 8Kp60 for individual screens. There are 3 DDI interfaces for DP 1.4a, HDMI 2.0b and DVI. You also get a single / dual channel 18/24 bit LVDS with support up to HD, or alternatively via the build option, 4-way eDP 1.4b. There is also a build option to use one of the DDI links for an HD compatible VGA interface.

Up to two of the DDI interfaces can be converted to USB4 (USB 4.0) with support for DP 1.4a using the alternate display mode. There may also be a potential TBC option to convert DDI to Thunderbolt 4, a variant of USB4. The module also supports Realtek ALC886 audio on the optional Express-BASE6 carrier card

The COM-HPC-cADP adopts the 120 x 120mm size B client form factor, which has been seen on modules such as Conga-HPC / cTLH based on Congatec’s Tiger Lake-H. Support for operating system and Intel technology is the same as on the Express-ADP, as is DDR5 up to 64GB. 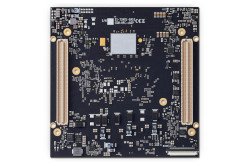 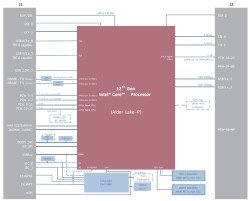 Audio support includes 2x Soundwire or 2x DMIC (TBC) plus a choice of HDA, I2S or a possible TBC option for 2x additional Soundwire. Unlike the Express-ADP, a 2x, 4-way MIPI-CSI interface is listed as TBC.

There are more PCIe Gen3 interfaces than on the Express-ADP. You get 16x PCIe Gen4 and 8x PCIe Gen3 plus LPC, SMBus, I2C and GP-SPI (to be confirmed). Again, some of the PCIe lanes can be used for an NVMe SSD. The characteristics of power and robustness are the same.

At the time of publication, the Seco site made no mention of the CHPC-D80-CSA module, which is featured on an Intel partner page. The module deploys Alder Lake-H using a 120 x 95mm COM-HPC Client Size A form factor. 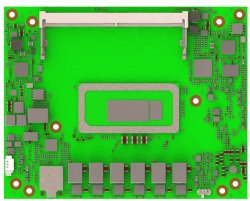 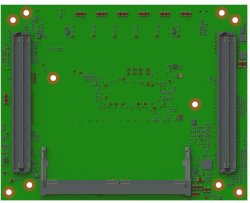 No pricing or availability information has been provided for Adlink’s Alder Lake or Seco CHPC-D80-CSA modules. More information can be found in Adlink’s announcement and on its Express-ADP and COM-HPC-cADP preview product pages.

More information about the Seco module can be found on the Intel page of the CHPC-D80-CSA.

How to easily send files between devices with Sharik

Sharing files between two devices on the same network should be easy, right? Anyone who wants to quickly transfer a file to or from their mobile device, or who has trouble setting up shared folders that all machines on their network can see or access, might have something to say about it. You can try […]

How to download and install Remix OS on PC

Are you sure your Linux servers in your data center are free from vulnerabilities? Otherwise, you need to scan them immediately. Jack Wallen shows you how to do it with Nessus. Image: Mark Agnor / Shutterstock Nessus is one of those tools that every network, system, and security administrator should have at their fingertips. Once […]